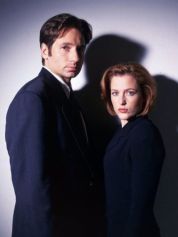 I never watched The X-Files growing up. When it first premiered, I was too young and my parents wouldn’t allow me. I think my father may have been interested in the show, but as far as I know never watched. I can remember seeing commercials for it and even occasionally being scared just by those, so I knew the actual show would probably terrify me. Then, when I became older I just never got into it because I would have had to start in the middle of the series, and that didn’t interest me. (I know, it’s shocking to think there was once a time where you couldn’t just get caught up on several seasons of a show via Netflix or DVD in order to jump in during the middle of it’s run.)

Therefore, I just never became an X-Files fan. By the time Netflix did come around the show was long over and I didn’t feel a pressing need to watch any more. I always had it in the back of my mind that maybe I would give it a chance – I have a lot of friends who were big fans – but it wasn’t high on my list of priorities. Then last week this happened.

With a revival in the works I decided now may be the best time to finally give The X-Files a chance. Over the weekend I watched the first three episodes of the series and decided it might be fun to keep a diary of my thoughts on each – my observations as a first time viewer. These probably won’t be extensive reviews, just random observations and comments. However, they’ll probably be a little more detailed than these first few are, since I didn’t think of the blog idea until after I watched and therefore didn’t really take note of my observations at the time.

Please feel free to join in the discussion! What do you remember about the first few episodes (or have you started a rewatch of your own)? Just don’t spoil any episodes I haven’t seen yet!

David Duchovny and Gillian Anderson look so young! Mulder’s obsession with aliens is kind of adorable – as is Scully humoring him. And for a skeptic, Scully sure jumped to conclusions about those mosquito bites on her back rather quickly.

I enjoyed the set up and getting to know the characters, but I really don’t understand the end of this episode. The aliens wanted their mess cleaned up, that I get. But why kill off all the others and leave these two unharmed? Did I miss something?

I liked this episode more than the pilot. As with most shows the pilot really had to work to set up the characters, where this one could focus more on the story and make it feel a little more cohesive.

So … they didn’t really resolve anything at the end of this one. The military guys just get away with wiping people’s memories, and even though Mulder and Scully know what’s going on they can’t prove it. I hate conspiracies. Do a lot of episodes end this way?

Finally, an episode with a little more resolution – although you know that guy squeezed himself out of that doorway. Stupid guards. Didn’t anyone warn them not to leave any openings?