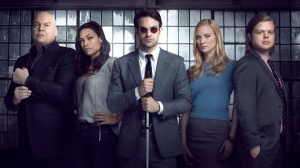 I love superheroes. When I was younger I was a big fan of the X-Men. While I wasn’t able to subscribe to many comics myself, I had a friend who had subscriptions to nearly everything and he was kind enough to keep me up-to-date on what was going on in the Marvel Universe. Gambit and Rogue were always my favorites. I can’t even count how many times I’ve read through each of their solo titles from the early `90s.

While most of the popular superheroes tend to be the mutants, or the aliens, or the ones with some sort of special powers and abilities, what I love most about Daredevil is how human he is. It’s that humanity – and the strengths and weaknesses associated with it – that this series focuses in on, and it’s what makes it so compelling.

I love the opening scene of the season finale. No words, no action, just mourning. This was an appropriate tribute to not only the character of Ben Urich, but Vondie Curtis-Hall’s performance as well. 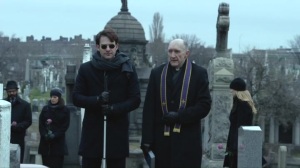 Our heroes all seem to be in a dark place at the start of the finale. Karen and Matt are each blaming themselves for Ben’s death – Karen for dragging him into the story, and Matt for not stopping Fisk before he had the chance to hurt someone else. Karen is also terrified Fisk will learn that Ben wasn’t alone when he visited Fisk’s mother. Foggy is conspicuously absent from the funeral, though he later finds Matt venting his anger on a punching bag at the gym.

In this scene we see Foggy and Matt finally finally come face to face and agree to try to work past their differences. It’s good to see them working together again, especially now that Foggy knows the truth. Foggy, however is a terrible liar. He and Matt are really going to have to work on keeping their stories straight if they plan to keep the secret from Karen for much longer.

Matt, Foggy, and Karen work together to track down where Owsley was keeping Detective Hoffman hidden, as insurance from Fisk. Matt pays Hoffman a visit, saving him from Fisk’s men, but forcing him to turn himself in and tell the police – the good cops – everything. This leads to a massive amount of indictments and the FBI finally coming to arrest Fisk.

Of course, nothing is that simple, and Fisk’s men mount a large – and very public – escape. Fisk’s speech about the Good Samaritan parable just before he is rescued may be one of my favorite Fisk scenes in the series. Vincent D’Onofrio delivered that perfectly. I also loved the shot of him walking away from the armored car – he is triumphant and has so much confidence; he doesn’t hurry, or look over his shoulder to see if anyone else was coming for him. At this time, he believes he still reigns over the city. 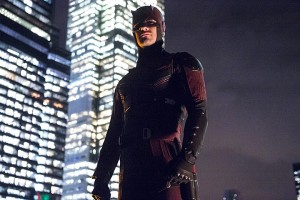 And here is where we get what all Daredevil fans have waited 13 episodes for – Matt Murdock puts on the red suit. The moment was definitely worth waiting for. Throughout this entire season you can see how he struggles with his mission, and how his fighting style and technique evolves. Matt doesn’t become Daredevil overnight, and by this point in the series if feels like he has truly earned the right to wear the suit. He fought his way from the ground up, and now he is Daredevil.

In his new suit, Daredevil tracks down Fisk one last time, but he does not cross that line he’s been wavering on all season. Fisk lives, and Daredevil turns him back over to the police.

This episode had a little less action than I was anticipating, but I think it was well-planned and executed, and it was a great ending to a brilliant first season. The final confrontation between Daredevil and Fisk was very well done and yet it didn’t feel final – especially when Fisk sat down in front of his cell wall. The ending left plenty open for a second season, and I really hope we get one sooner rather than later.

I love Marvel’s Agents of S.H.I.E.L.D., but I think Daredevil has proven how well the Netflix model works for shows like this. While S.H.I.E.L.D. floundered a little in it’s first season, and didn’t really find it’s footing until Captain America: The Winter Soldier came out, Daredevil feels focused in a way S.H.I.E.L.D. did not. Every little detail of this show has been plotted out – even little comments that Foggy might make, which have no bearing on the overall arc, will pop up later in the series. For example, how much he loved the free bagels at their internship, or the story of his mom wanting him to be a butcher, or the avocadoes. There are very few throw away plot points in this series. Charlie Cox described it as a 13-hour movie during the panel at NYCC and he was absolutely correct. All the detail and careful plotting really does make it feel like one big long film.

Speaking of very few throw away plot points – what’s the deal with that last scene with Stick in episode 7? I’m sure if I were more familiar with the comics I would already know, but in the series we never found out who he was speaking to, or what they were talking about. Since every little detail has been carefully planned, I can only think that this is a setup for either a second series, or for The Defenders or one of the other Marvel series coming to Netflix. (Edit: I’ve done some research and apparently this, as well as Gao’s further than China comment, are all allusions to Iron Fist. Since I know nothing about Iron Fist, it’s no surprise I missed that.)

I have watched every episode of this series twice, and it wasn’t until yesterday I realized I missed an Elektra reference in episode 10 both times. As I was reading The Man Without Fear for the first time I was wondering whether or not they would ever introduce Elektra in the series, if it gets more seasons, and would they make her a college acquaintance of Matt and Foggy? That’s when it hit me – that is exactly what they did. In one of the flashbacks in episode 10 Foggy accuses Matt of only taking Spanish because of that “Greek girl.” That is one reference I should have caught, even with my limited Daredevil knowledge, but it went completely over my head. It also took two viewings to finally catch Stan Lee’s “cameo.” I was disappointed when I didn’t see him on the first viewing. I’m still a little disappointed he wasn’t actually in the show, but since his cameos are usually humorous it probably would have felt a little out of place. What other Easter Eggs were planted in the series that I missed?

As I mentioned above, I have now watched every episode  twice (my excuse is that it was necessary in order to write these reviews) and it was just as good, if not better, the second time around. I have always been a fan of the Marvel Cinematic Universe, but with Daredevil they have really stepped up and created a near-perfect superhero show. The bar has definitely been set high for the other series they have planned with Netflix and I’m looking forward to seeing how those turn out, but at this point I’m mostly just hoping there’s more Daredevil in the future.