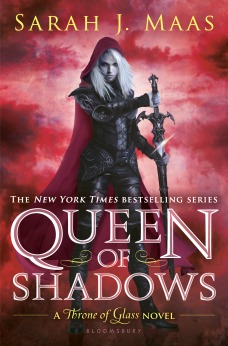 Before I begin, a word about spoilers: I am a spoiler-phobe and would never want to read a spoilery review of a book I haven’t read, therefore I try to avoid spoilers as much as possible. However, I understand that everyone has their own definition of what constitutes a spoiler so I can’t make any promises. In addition to that, as this is the fourth book in a series, I cannot really review it without giving away at least some spoilers from the previous books. If you have not read them, I suggest you do. Then you can check out my reviews for Throne of Glass, Crown of Midnight, and Heir of Fire before coming back here.

I will allow spoilers in the comments for anyone who wants to discuss their thoughts/opinions on the book. So if you haven’t read yet and want to avoid spoilers, then skip the comments (or don’t read too closely).

You have been warned. Now, onto the review.

In Queen of Shadows Aelin Galathynius has finally embraced her heritage and returns from Wendlyn ready to take up the battle against the King, find the wyrdkeys and stop his plan. First, she must rescue her beloved cousin Aedion then deal with her former master, Arobynn. Along the way she makes some new friends and allies, new enemies and begins to form the backbone of her future court.

I’m always a little hesitant about getting into a YA series because most of the ones I read tend to lose something somewhere along the way and often end in disappointment. It happened with Divergent, The Hunger Games, The Tiger’s Curse, The Mortal Instruments … and the list goes on. The most impressive thing about the Throne of Glass series is that we are now four books in, and it has showed no signs of slowing down.

Queen of Shadows picks up not long after Heir of Fire ended – with Aelin’s arrival in Rifthold. The fact that the narration has changed to Aelin proves that she’s maintaining the commitment she made to herself and her destiny while in Wendlyn. Celaena Sardothien no longer exists – except for a few times Aelin must wear that mask throughout this book. It’s an interesting choice to completely change the identity of your main character halfway through a series, but Maas made that transition with us in Heir of Fire, so it only felt natural to think of her as Aelin and not Celaena now.

We get to see a lot of characters interacting for the first time in this novel, and I really enjoyed those interactions a lot. There are also two new characters introduced: Lysandra, a courtesan and former acquaintance of Aelin’s and Nesryn, Chaol’s new lieutenant in the rebellion. I’m going to be honest and say, while Chaol has been one of my favorite characters through this series, I really just wanted to strangle him through most of this book; he was so frustrating. I think I’m finally okay with Aelin moving on from Chaol. It was nice to see Aelin making female friends again, since most of her interaction since Nehemia’s death has been just with men.

While the pace of this novel didn’t slow at all, it still has the sense that we’re coming near a conclusion soon. There were a lot of threads from the series brought back out in this book and tied up, some endings and new beginnings, with a slightly unexpected revelation. I won’t give anything away, except to say that there’s at least one element in this novel I wasn’t expecting to see until the final book. However, the stage for that book has definitely been set. [Edit: I know I have read in multiple places that there will be five novels in the series, but it has been brought to my attention that Maas’ website states there will be six. Therefore it’ll be really interesting to see where the next novel goes, because I really felt like everything could be concluded well with one more novel. This has to mean Maas has another twist up her sleeve.]

One thing I was happy to see was the continuation of Manon’s arc along the same path I suspected from Heir of Fire. Manon is such a fascinating character – born to be wicked and bloodthirsty and unforgiving, but in Heir of Fire she showed some signs of something more. I really enjoyed seeing her character, and other members of the Thirteen, developed more in this novel. I’m curious about what role they’ll play in the final battle (which has already had a couple changes to the lineup that I wasn’t expecting).

One of the things I’ve mentioned before that I love about this series is that it didn’t start out with Aelin (Celaena at the time) meeting “Mr. Right” in the first novel, and fighting to keep him through the series. Maas tends to defy a lot of the standard YA tropes, and this is quite refreshing. I like that as Aelin changes and matures so do her relationships with her friends and loved ones. There was no clear choice for her, though I’m hoping things stay as they are by the end of Queen of Shadows, because where she is now feels right. Up until now I didn’t even know who I wanted her to end up with, though I’ve made my choice now. I also suspect a new, possibly controversial, ship was hinted at in this book which could be really interesting. (If you know which I’m talking about, did anyone else pick up on that?)

I really enjoyed this book and was so happy it did not disappoint. This series is definitely restoring my faith in YA series, and in strong female characters within a YA series.