Last month I reviewed the first novel of the Grisha Trilogy, Shadow and Bone, and decided to continue reading the series. I’m not sure I have enough to say about each book to create individual posts, so I’ll just review them together. I make no promises about spoilers since I am reviewing two books in one post, so proceed at your own risk.

Darkness never dies.
Hunted across the True Sea, haunted by the lives she took on the Fold, Alina must try to make a life with Mal in an unfamiliar land, all while keeping her identity as the Sun Summoner a secret. But she can’t outrun her past or her destiny for long.
The Darkling has emerged from the Shadow Fold with a terrifying new power and a dangerous plan that will test the very boundaries of the natural world. With the help of a notorious privateer, Alina returns to the country she abandoned, determined to fight the forces gathering against Ravka. But as her power grows, Alina slips deeper into the Darkling’s game of forbidden magic, and farther away from Mal. Somehow, she will have to choose between her country, her power, and the love she always thought would guide her–or risk losing everything to the oncoming storm. (Goodreads)

This was definitely a middle book in a series. I was disappointed at first because Alina and Mal were recaptured almost immediately, and it felt like everything they did to escape at the end of the first book was useless. Perhaps if I had not been reading these books back to back, that aspect of it wouldn’t have bothered me as much. Then they escaped from their capture – I liked that twist, as well as the twist in the identity of their rescuer – and nothing much happens until the end of the book. I really felt like this book was just bookended by the action sequences, and nothing else interesting really happened in the middle except Alina and Mal drifting further and further apart. I felt like there was a really good set up in the first book for darkness in Alina, something that I would like to see explored more, but that was barely addressed in this book. It was once again hinted at, but never truly brought to fruition. 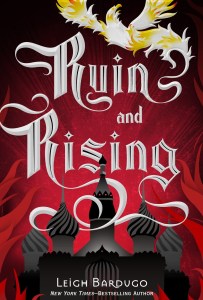 The capital has fallen. The Darkling rules Ravka from his shadow throne.
Now the nation’s fate rests with a broken Sun Summoner, a disgraced tracker, and the shattered remnants of a once-great magical army.
Deep in an ancient network of tunnels and caverns, a weakened Alina must submit to the dubious protection of the Apparat and the zealots who worship her as a Saint. Yet her plans lie elsewhere, with the hunt for the elusive firebird and the hope that an outlaw prince still survives.
Alina will have to forge new alliances and put aside old rivalries as she and Mal race to find the last of Morozova’s amplifiers. But as she begins to unravel the Darkling’s secrets, she reveals a past that will forever alter her understanding of the bond they share and the power she wields. The firebird is the one thing that stands between Ravka and destruction–and claiming it could cost Alina the very future she’s fighting for. (Goodreads)

I honestly believe this was the best book of the series. Finally, the story was really going somewhere and there were some turns that I did not see coming. Alina’s darkness was finally addressed – though not exactly in the way I had hoped (I thought it would have been really interesting if she turned evil even briefly) but the twist with the third amplifier and what that required of her was possibly the most compelling aspect of the series. It also helped set the series apart from other similar YA series.

Unlike the second novel, which seemed to really drag for most of the book, there was constant movement in this novel – the characters were constantly moving forward and working towards achieving what they needed to defeat the Darkling. There were ups and downs, surprises and suspense – this final installment went a long way to make up for the lackluster plot and action of the second novel.

I wouldn’t necessarily go so far as to say I was disappointed with this series, though from reviews I’ve read I was definitely expecting more. If the third novel hadn’t picked up the pace I may have been much more disappointed. It wasn’t quite as good as I was expecting or hoping it would be, but overall it wasn’t a bad read and I really did enjoy that it explored a different type of culture from what we’re used to seeing in more YA fantasy novels. I also liked the magic system Bardugo set up. However, unfortunately there just wasn’t enough in this series to really impress me or set it apart from any other YA series, at least in my mind. It was enjoyable enough to read, but it will probably also prove to be rather forgettable in the long run.