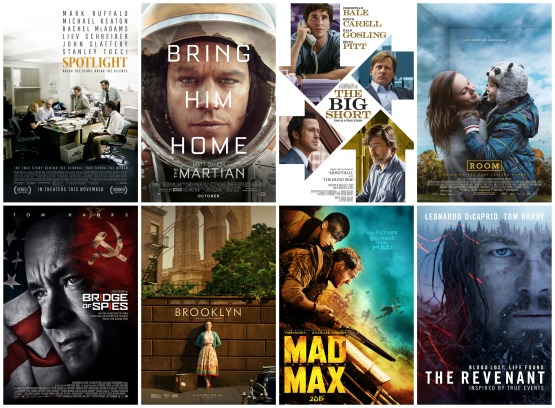 Last Thursday, The Academy announced the nominees for 2016 Academy Awards, which means it is once again time for me to start my annual attempt to view all the Best Picture nominees, and as many of the other films nominated, as possible before Sunday, February 28th.

I love the Oscars. I know there has been a lot of controversy over them the last couple year; I just love movies and love being able to celebrate the films that have made significant achievements this past year. I do hope the nominations will soon start reflecting more diversity, but I also feel like the issue lies much deeper than just the Academy. I think there needs to be more diversity in the films themselves, and which films receive recognition in general. Off the top of my head I can only think of two films featuring African Americans that could have been nominated – Creed and Straight Outta Compton. I’m sure there must be more and I don’t know if this is my own failing for not seeking out more diverse films, or if the entire film industry just needs to put more emphasis in promoting diversity in film and making people aware these films exist. Hopefully next year we’ll see more diversity in the films being promoted for Oscar recognition and then in the nominees themselves.

Several of this year’s nominees took me by surprise. I honestly never expected Mad Max: Fury Road to receive a Best Picture nomination. That was the biggest surprise to me. I haven’t seen it yet, so I honestly can’t judge but it just did not seem at all like the kind of movie the Academy would recognize – though I’m told it’s technical achievements are fantastic. I was also excited to see The Martian nominated, simply because I loved that movie so much (and those of you who read my blog regularly know how much I loved the novel). I wasn’t necessarily expecting it to be nominated, but I can’t say I’m surprised; the movie was extremely well done.

I know very little about the other six nominees. I had been planning to see Room at some point, as I have heard so many good things about the movie. Spotlight has also been on my viewing list for a while, though mostly because I had a feeling it would receive an Oscar nomination. However, the cast is also excellent. I feel like The Big Short may be this years The Wolf of Wall Street (which I really did not enjoy) – not necessarily content-wise (because the two films are vastly different) but just in my overall opinion of the film once I’ve watched, but I could be rushing to judgement.

The Revenant is a film that if it weren’t for the nomination I would probably have very little interest in viewing. It just seems dark and somewhat depressing to me. However, I was pretty sure it was going to be nominated, so I’ve been preparing myself to watch that one. While I wasn’t a big fan of Birdman last year, I did love the way it was filmed and Alejandro González Iñárritu did an excellent job, so I’m looking forward to those technical aspects of The Revenant because I suspect they’ll be the best part.

Bridge of Spies and Brooklyn just seem like the odd children in this pack of nominees. I suspect while each will be a great film, they won’t have the clout to really contend for that Oscar. I suspect Bridge of Spies will be much like Tom Hanks’ last Best Picture nomination, Captain Phillips, an excellent film but not even close to winning, and Brooklyn just kind of snuck in there.

At this point, without seeing all the films, I have a feeling the Best Picture winner will come down to The Revenant, The Big Short, or Spotlight. I can’t narrow it down more than that, and I could be completely wrong. We’ll see on February 28th. Until then, I’m going to enjoy viewing all the films and forming my opinions on who should win.