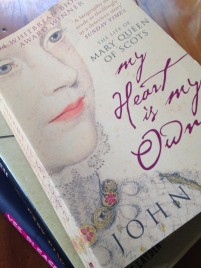 Winter is a great time to read. I hate the bitter cold, and I’m not a big fan of snow, so I’m perfectly content to curl up inside where it’s nice and warm and just read. I did a lot of reading this past month; I already reviewed Touch by Claire North, Shadow Study by Maria V. Snyder, and The Sculptor by Scott McCloud in earlier posts. Here are some brief thoughts on the other books I read this month.

My Heart is My Own by John Guy

February was biography month for the book challenge I’m working towards. I don’t read a lot of biography – I tend to prefer memoirs, which are more interesting to me – but I picked this biography of Mary Queen of Scots up while in Scotland and decided it was time to read it. Prior to reading the book I knew very little about Mary, aside from literary license taken in the CW show Reign. I found Mary a fascinating character and in her youth a strong, independent woman. She sounded like the kind of woman who would have been fun to be around. While at times this book was slow – as I expect biographies to be – I did enjoy it overall.

The First Fifteen Lives of Harry August by Claire North

A friend first brought this book to my attention, and then I saw a random review on a website and decided that was my sign that I needed to be reading it. I fell in love with this book almost immediately. Harry August is a man who lives multiple lives – every time he dies he is born again in the exact same place and begins his life all over with the knowledge of his previous lives. I thought this was a fascinating take on the ideas of time travel as well as reincarnation. North tells the story in a non-linear style, jumping around as Harry recalls moments and details from among his many lives while he’s telling the read his story. The prose is beautifully written and draws the reader in from the beginning.

I continued my Inheritance series reread by finishing Eldest. I didn’t recall this one quite as much as I did Eragon, so it was a good idea to go through and reread it before starting on the two I haven’t read. I have to admit that Eldest just isn’t as engaging as Eragon is. Perhaps that, as well as the time between publication, was a factor in my never finishing the series.

This was the February read for my scifi book club and I really enjoyed it. At times much of the science seemed to go way over my head (which is often the case in scifi novels) but I really liked the suspense and mystery elements to the story.

The Walking Dead vols. 6 and 7

I am slowly working my way through the Walking Dead graphic novels. It never takes me long to read one, but my budget prevents me from just going out and purchasing them all in one shot, so I’m reading a couple every few months. Volume 6 tells of the escape from Woodbury, while volume 7 is aptly titled “The Calm Before” as we see life in the months between the escape and the Governor’s assault on the prison. This series is one where I actually appreciate the differences between the television series and the comics, because I can fully enjoy each medium without spoilers ruining the effect for me, and I love not being sure what’s going to happen next. For example, Carol’s fate in the comics took me completely by surprise.

Upcoming Reads:
I didn’t really make a dent in the list of upcoming reads from last month, so they’re just bring held over with a few additions:

Cleopatra by Stacey Schiff
Old Man’s War by John Scalzi
Orphan Train by Christine Baker Kline
My Mother She Killed Me, My Father He Ate Me by various authors
Trigger Warning by Neil Gaiman
To Kill a Mockingbird by Harper Lee