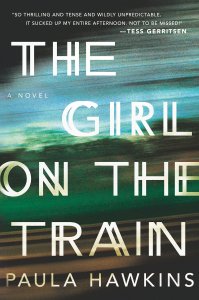 This book has been getting so much attention and is so often compared to Gillian Flynn’s Gone Girl that I had to check it out. I have to be honest, it doesn’t live up to the hype.

The Girl on the Train is the story of Rachel, an alcoholic still struggling with her divorce and losing her job. Every day she takes the train to London to avoid telling her flatmate she was fired and every day she watches a young couple in a house several doors down from her old home (where her husband now lives with the woman he cheated on Rachel with). One day Rachel discovers that Megan, the young wife she has become borderline obsessed with has disappeared and Rachel decides to insert herself in the investigation. The novel is told alternately from Rachel’s point of view as well as that of Anna (her ex-husband’s mistress-turned-wife) and occasionally Megan.

All through the book I felt like Hawkins was trying too hard to write the next Gone Girl (and her publisher just wanted to print the next Gone Girl) and she just did not succeed. (Note to everyone: Even Gone Girl doesn’t live up to the Gone Girl hype. Yes it’s a good book, but it’s not even my favorite of Flynn’s novels.) The style and tone of the novel are similar to a Flynn novel, but Hawkin’s fails to reach the depth and complexity of the characters that makes Flynn’s novels so engrossing. Also, the mystery itself wasn’t that difficult to solve; there really was no ‘twist’ at the end, I figured out what happened before I was even halfway through the novel.

Another aspect of this novel that was really disappointing were the characters. As I alluded to above, Flynn’s characters are complex and often deeply disturbed individuals. Hawkins clearly is attempting to create similar characters, but instead they all come off as pathetic and negative stereotypes. All three of the women who narrate the novel nearly indistinguishable from each other; they have no personality of their own and their narrative voice is almost identical, to the point where I had to frequently remind myself which chapter I was reading – near the end of the book they even point out within the novel that Anna is essentially become Rachel. It’s supposed to be making a point about her husband, but instead it just makes her seem equally weak. These women are also lonely, unhappy and easily manipulated; not one of them really shows any sign of strength until the very end and then it seems to come out of nowhere because it’s not at all in character. The men are manipulative and abusive (emotionally and physically).

The characters in Flynn’s novels are often unlikable as well, but at least they have individual personalities that make them interesting – and the women, though damaged, are strong-willed and independent. Flynn’s novels represent a shift in gothic fiction from the earlier works in which women were merely victims requiring men to rescue them, to women who are still victims, but are able to use their pasts to become stronger. While you could argue that Hawkins falls in the same vein, her female characters are still much weaker than any woman in a Flynn novel and are really a step backward.

One thing this novel does have going for it is that it is a quick read, so those curious won’t waste a lot of time on it, fortunately. But it you’re looking for a good mystery, stick to Flynn or Tana French.