Earlier this week ABC Family announced they were moving forward with a drama series based on Cassandra Clare’s The Mortal Instruments series. This possibility had been rumored for quite some time, and given the popularity of the books, but lackluster showing the feature film made at the box office, it’s not a surprise the powers that be want to try some other means of adapting the series to screen.

I have to be honest, the first attempt to adapt this series to film was ambitious, but not great. From the beginning I wasn’t impressed with the main cast. I think Godfrey Gao was probably the best casting choice they made – he was perfect as Magnus Bane – and Aidan Turner is never a bad choice (though I may be biased). However, the rest of the cast, though talented, were not at all how I imagined the characters and I was rather disappointed – even more so when I saw them on screen.

Then there were the usual problems that arise when a film is adapted from a book – there was so much in the books that had to be condensed or cut out from the film. And, as is often the case, a lot of that material is good material.

When I read The Mortal Instruments books for the first time I loved them. In the interest of full-disclosure, I was not nearly as big a fan of the second 3 books in the main series as I was the first three (I think she really should have stopped at the third) but I loved the characters, the setting and the premise. I also loved Clare’s way of writing. So often I feel like YA writers have a tendency to over simplify storylines and dumb things down for the readers, and sacrifice plot to make a good romantic storyline. Clare didn’t do that. Her characters were complex and their relationships complicated.

Clare didn’t follow what I consider the typical “formula” for YA paranormal romance novels (of which, the Twilight books are the prime example). Book 1: Girl meets boy who is way out of her league and she feels inferior, but they fall hopelessly in love anyway and overcome obstacles to be happy by books end. Book 2: Something happens that separates the happy couple, either voluntarily or involuntarily and they spend much of the book apart. Frequently a third corner of a love triangle forms at this time. Book 3-however many are left: The happy couple reunites and overcome all odds to live happily ever after.

However, as I stated above, Clare didn’t follow this pattern.

First of all, even though Clary is immediately interested in Jace, she’s never truly inferior compared to him. While she initially seems weaker, she learns that she too comes from a line of Shadowhunters and has the same capacity to become an equal through training and experience – not through Jace having to transform her in any way. She is capable of becoming stronger on her own. Also, Jace and Clary never actually end up together in the first book, even though it’s clear they would like to be, as they are told that Jace is actually Clary’s long-lost brother, whom her mother thought was dead. The two then spend much of the next two books believing they are siblings, and therefore cannot be together even though they love each other. I loved this twist because it was something new and it made their relationship that much more interesting. Sure, it was soap opera material, but it wasn’t the same boy-meets-girl plot we’ve all seen a hundred times.

And that is why I loved these novels almost immediately – I loved that Clare was putting a different spin on the genre, which is often just versions of the same thing over and over again.

So, as a fan of Clare’s work, it’s not easy for me to say that I was really disappointed with the film. If it had not been an adaptation, it would have been fine. The cast did a great job and the movie was interesting, it just missed that spark that really made me love these books. It felt like it was just another teen film, which is exactly the opposite of why I loved the books.

Which brings us back to the proposed television series. I actually believe that this book series would be much better served by a television series than a film. With TV you could include more of the smaller plots that get left out of a movie, and it allows more time for the character development that was missing from the film. It also gives you a chance to explore other areas of the Shadowhunter world, because lets face it, people are much more forgiving of a TV show that doesn’t stick to the source material than they are of a film that veers off course (look at The Walking Dead, True Blood or even Game of Thrones). I think I am actually much more excited about the prospect of this being a TV series than I was when the film was initially announced.

I’m also excited that this means a new cast, which they will hopefully get right this time. No offense to the cast of the film, which was actually a pretty impressive cast. With the exception of Lily Collins (whom I didn’t really know until the City of Bones was released) I am a fan of nearly everyone in the movie cast apart from the film, they just didn’t fit my view of the characters.

So who would I like to see cast in this series? I have been thinking about that for days, and am not sure I have any definite “This person needs to play so-and-so” names, but I do have a few ideas after the jump.

Since I was not a huge fan of the movie and I am not attached to many of the cast members, I am perfectly fine accepting the idea that most – if not all – of the cast will have to be replaced for the series. Actually, I think it best to get a fresh start. Therefore, here are some suggestions for actors and actresses I think would be good in the roles.

Clary Fray: Right from the start, when the film was originally announced I really wanted Molly Quinn to play Clary. She is almost exactly who I pictured as I read the books, and she reads the audiobooks, so I can’t possibly have been the first person to think of it. If Castle gets another season she might not be available, but I really think she’d be perfect.

Jace Wayland/Lightwood/Morgenstern/Herondale: Jamie Campbell Bower is a great actor, but I was never very enthusiastic about him as Jace. Something about his attitude and presence just didn’t fit for me. That being said, I honestly don’t know who I would prefer in the role. When I read the books I imagined Paul Wesley as Jace, but I no longer think he’d be the best fit (plus he’s getting a little old to play a 17-year-old). Now I have no idea who I would like to see in the role, but two suggestions I’ve found online that I can kind of see include Austin Butler or Grey Damon. I prefer Damon, but he’s a little older. Other possibilities: Louis Hunter and Daniel Sharman (though he’s already booked a pilot for next year).

Alec Lightwood: I really like Kevin Zegers, but I had mixed feelings about him as Alec. One person I wouldn’t mind seeing in this role is Ethan Peck – though that could be just because I really want to see him on TV again. But I really do think he’d be good as Alec. And if not Hunter for Jace, then perhaps he’d make a good Alec as well.

Isabelle Lightwood: In the movie Isabelle was just missing some of the spirit that made me love the character so much in the books and she didn’t feel right to me. I think Crystal Reed could pull off this part so well – we were just starting to see what she could do when she left Teen Wolf. I think she could possibly be the perfect Isabelle.

Simon Lewis: I love Simon. He’s so quirky and adorable. One of my first thoughts was Dylan O’Brien (though I know he’s busy with Teen Wolf and the Maze Runner movies, and I’m still holding out hope for Spider-Man). You need someone in this role who can be fun, but who can eventually pull off the heavier stuff as well, and O’Brien can do both really well. I know O’Brien is a long shot, but I really can’t think of who I would like to see in this role.

Magnus Bane: I can’t recast Magnus. I loved Gao. He was possibly the best part of the movie.

Jocelyn Fray: Lena Headey is actually a great choice for Jocelyn, even though I know she wouldn’t be able to play her in a series. Headey just has that natural inner strength that makes you believe she was once a kick-ass Shadowhunter. I really don’t know who I would suggest play her in the series, though Rebecca Mader did come to mind.

Luke Garroway: I love Turner. LOVE him. Turner was actually the member of the cast that I was most excited about when they were making announcements about the movie. I would not mind if he reprised his role in the series, though I know he’s in the British series Poldark now. If Turner isn’t available, how about another actor with experience as a wolf? I know Joe Manganiello had to drop out of Scream Queens for scheduling conflicts, but maybe he’d have time for Shadowhunters. Another good choice would be Kris Holden-Reid. 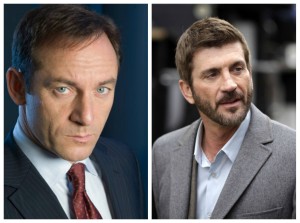 Valentine Morgenstern: I really love Jonathan Rhys-Meyers, but he was not even close to the Valentine I had pictured. They made him look too young and rough. I always pictured him as calm, distinguished, and dangerous. We all know Jason Isaacs can play evil really well, but he also has that charisma and smile that makes you understand how others could have been drawn into his lies, and believe what they were doing was for the greater good. He doesn’t just look like a madman, the way he did in the movie. Another good option would be Joe Lando. We got to see a little of what he could do as an antaganist in The Secret Circle and I think he could probably pull off the calm and dangerous nature of Valentine quite well (and I certainly wouldn’t fault Jocelyn for falling in love with him).

Filming is set to begin in May, so we probably won’t have to wait long for the official casting announcements.