In October 2014 I had the extreme pleasure of attending New York Comic Con as a member of the press. It was one of the greatest experiences I’ve had; I loved every minute of it. It’s hard to believe it’s already been 6 months! Hopefully 6 months from now I’ll be returning a second round at NYCC.

I don’t usually follow the whole TBT trend, but I thought today I would share the review of the NYCC I wrote for the fanzine my book club, Watch the Skies produces. This was originally published in their October fanzine.

I hate crowds. I tend to be mildly claustrophobic, therefore being surrounded on all sides by massive hordes of people doesn’t necessarily appeal to me. So naturally I pick the year New York tops San Diego in attendance to decide it’s time for me to experience the biggest pop culture convention in the East Coast – and now in North America.

To my surprise, the crowds – over 151,000 individuals over four days – did not bother me at all the way I expected them to. In fact, I felt completely comfortable navigating my way through them on the show floor. Perhaps it was the knowledge that if they really became overwhelming I could retreat the area reserved for press, VIPs and the like, or maybe it was because all these people were just like me – for the first time I was in a large crowd of people and wasn’t worried about being judged. We were all very different – some were superheroes, others villains, some cartoons, some, like me, just plain old human – but we were all there for the same reason: we’re all nerds. And for a nerd, New York Comic Con 2014 was the place to be.

NYCC may not get the same high profile guests that SDCC attracts every year, but it did have a lot of great panels and guests. They kicked off the weekend with previews of Big Hero 6 and Tomorrowland – which I hadn’t even heard about until I saw it on the schedule. Perhaps the biggest surprise of the weekend was the moment George Clooney walked out on stage during the Tomorrowland panel, and then proceeded to apologize for Batman and Robin.

There were a lot more television panels than film panels and they represented a variety of programs. From Archer and Adult Swim, to Elementary, Marvel’s Agents of S.H.I.E.L.D., Sleepy Hollow, Gotham and The Walking Dead. Fans were also treated to first footage from two new Marvel series over the course of the weekend, Agent Carter and Daredevil. While Agent Carter has the same look and feel as the rest of the Marvel franchise, the inspiration for Daredevil is coming from the Frank Miller and Brian Bendis storylines and is therefore darker in tone than we’re accustomed to with Marvel of late, but it looks good so far. Speaking of dark, Constantine was really being hyped this weekend, as the pilot episode was shown twice – the second time followed by a Q&A with the cast, who promise the series has not been tamed for television (and judging from the pilot I’m inclined to agree).

For comics panels they had a variety of writers and artists from multiple publishers. DC is still celebrating 75 years of Batman, and had several panels to that effect and Marvel made several big announcements over the weekend, including the return of Secret Wars. 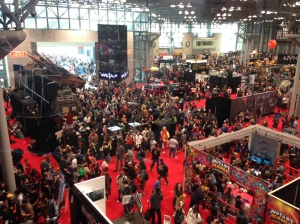 The NYCC show floor is a maze of vendors and artists selling a wide range of memorabilia and souvenirs. Stepping onto the show floor could easily result in sensory overload, as everywhere you look something is going on; Virtual Reality games, signings, photos, cosplayers, etc. My favorite booth was the Weta Workshop booth, with its life size replicas of Azog from The Hobbit, Gollum, and even Smaug’s head, which would occasionally open his glowing eyes to look down at you as you walked past. The show floor doesn’t seem like that large a space, but you could easily spend hours walking through it and never see anything – especially if you’re not paying attention to where you’re walking and just end up going in circles.

In my wanderings I was able to view the copy of Action Comics #1 which was recently purchased at auction for $3.2 million – the highest price ever paid for a comic book. I also stumbled upon Tor’s table just as John Scalzi was signing books and purchased a copy of Lock In for him to sign. Kim Harrison and Patrick Rothfuss were also scheduled for book signings this weekend, but I never made it to the floor while they were there.

The Block was a section adjacent to the show floor in which housed a lot of artists, collectibles and other unique tables. This area had probably the most unique merchandise on the show floor. I had hoped to find Terry Moore – creator of the comic Rachel Rising – here but never had an opportunity to find his table.

There were a lot of great cosplayers at NYCC. I didn’t get many photos, partly because my camera broke the first day and I was relying on just my cell phone all weekend and partly because I was too shy to ask for them, but there were a lot I really liked. On Thursday a guy who could already pass for a Gene Simmons look-alike was dressed as one of Joker’s minions from the first Tim Burton Batman. There was also a guy dressed as Oberyn Martell who looked so much like the actor from Game of Thrones I actually did a double-take. Harley Quinn was a popular cosplay, as was just about any character from Avatar or Legend of Korra and of course there were countless Doctors and companions. I even saw at least one Twelfth Doctor.

Overall, I’d have to say that my first Comic Con experience was a really good one. I had heard horror stories about waiting in line all night just to get into Hall H at SDCC, but that wasn’t the case here. NYCC instituted a hall clearing and wristband policy for the Main Hall for the first time this year. You had to have a wristband to be allowed in for a certain panel, which meant waiting in line first thing in the morning, but then having freedom to enjoy the rest of the day. I liked knowing that I was definitely going to be able to get in without having to wait all day long – if it wasn’t for their wristband policy I probably never would have made it in to seeThe Walking Dead panel on Saturday, which was easily the most popular panel of the entire weekend. I spoke to several con-goers who really liked the new wristband policy as compared to how things have worked in the past and while I can’t compare, I think it worked out really well.

Not only was this my first Comic Con, but this was my first convention period of this scale – the little Supernatural fan convention I attended several years ago was nothing compared to this. I learned quickly that the trick with Comic Con is to accept the fact that you’re probably not going to have time to do or see everything you would like, and you have to expect to spend a large percentage of your day waiting in a line for something – whether it’s a panel, an autograph, a photo op or even just to get food or use the restroom. Comic Con is all about the lines. But if you accept that, come prepared, and are friendly towards those waiting in line around you, it’s not so bad. If an impatient, claustrophobic introvert like me can enjoy Comic Con, then almost anybody can. And I already can’t wait for NYCC 2015.

That was my review for Watch the Skies. In the interest of not rambling too much, I left out a lot of my favorite moments. I had the privilege of interviewing some of the cast and writers of Sleepy Hollow and all of The Librarians, I met Chris Hardwick, and Jerry O’Connell, Stephen Amell and I commiserated about how difficult it is to properly pronounce our names (after he got mine right on the first try!), and I finally met my childhood hero Westley – also known as Cary Elwes. Thanks to the wristband policy I was able to get into every panel I really wanted in the main hall – I was in the same room as the entire cast of The Walking Dead!

If you’d like to read more about my experiences at NYCC, as well as commentary from some of my colleagues that also attended, you can check out the NYCC page at Curiata.com. There you will find my daily NYCC diaries as well as in depth reviews of the Marvel panels for Daredevil and Agent Carter, as well as my interviews with the cast of The Librarians and some of the cast of Sleepy Hollow.

I have friends who attend San Diego Comic Con every year, and I have always been jealous of their adventures. This year I was able to get a little taste of what they experience, and it only increased my desire to someday make the pilgrimage to San Diego myself. Spending an entire weekend with fellow nerds and fans and celebrating all that we love is definitely an experience worth having, and I can’t wait to go back.