Here we are, coming down to the home stretch where everything really starts to pick up momentum as we head towards the finale. While the series on a whole has been excellent, and there have been a lot of great moments to point to, I honestly think everyone is giving some of their best performances in these four episodes leading into the finale.

Episodes nine and ten, much like five and six, are basically two halves of a whole. In episode nine, “Speak of the Devil,” Mrs. Cardenas is murdered and though it appears to be drug-related, Matt suspects Fisk. The episode is punctuated with scenes of Matt in a brutal fight with Nobu, which we eventually learn was part of a trap set for Matt when he went after Fisk in revenge. In the end Fisk himself shows up and Matt barely manages to escape alive. After a night of drinking and blaming himself for Mrs. Cardenas’ death, Foggy shows up at Matt’s apartment and, upon hearing thumps inside, lets himself in only to discover the man in the mask bruised and bleeding on the floor. Foggy begins to dial 911, but something makes him stop. He reaches for the mask and is shocked to discover who is underneath.

Episode 10 deals with the fallout of Foggy’s discovery and the effect it has on his and Matt’s relationship. The episode frequently flashes back to their college days and shows how Foggy and Matt met, their internship days and their decision to start their own firm. Flashbacks also reveal for the first time how and when Matt made the decision to put on the mask. Elsewhere in episode 10 Karen and Ben discover Fisk’s mom alive and hidden away in a nursing home, where she tells them the truth about Fisk’s father. While attending a public function Vanessa, and several other guests are poisoned.

These two episodes are possibly my favorite of the series. Episode nine was intense – I squirmed so much as I watched Nobu dominate the fight with Matt throughout the episode; every time those blades sliced into him, and when he was being dragged along the floor? It was intense and brutal and almost physically hurt to watch. I also loved how the episode explores whether or not Matt is ready or willing to go so far as to kill Fisk if it comes to that.

In episode 10 I loved how they took a step back from the action and focused on Matt and Foggy’s friendship. Often when secret identities are revealed a show will quickly move on, but Daredevil really took the time to explore the consequences of Matt lying to Foggy for all those years. Charlie Cox and Elden Henson each gave incredible performances in this episode – absolutely brilliant and heartbreaking at the same time. 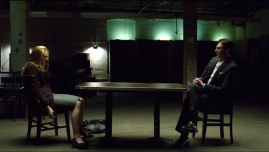 In episode 11, “The Path of the Righteous” Matt and Foggy still are not speaking and Foggy drowns his betrayal in alcohol and Marcie, while Matt learns where he can get the nifty light-weight armor that protects Fisk. Meanwhile Fisk and his men are holding vigil at the hospital waiting for Vanessa to recover. When Wesley learns about Karen’s trip to Fisk’s mom, he kidnaps Karen then foolishly thinks she isn’t capable of shooting him. She proves him wrong – seven times.

One thing I wish we had learned is Wesley’s backstory. I’m really curious what makes him so loyal to Fisk – not even just loyal, but Wesley seems to genuinely care about his boss and goes after Karen in order to protect him. Many of Fisk’s associates follow his orders because they fear him, but with Wesley it’s not fear; it’s closer to respect and I’m really curious about what inspires that level of loyalty. Even Fisk thinks of Wesley as a friend rather than just an employee, and in truth he’s probably the only friend Fisk has, aside from Vanessa.

This episode really seemed to close the door forever on any relationship between Matt and Claire. It’s a shame, even though I know Matt and Karen are canon, I liked Matt and Claire’s chemistry. However I was more okay with it that I was expecting. This relationship has evolved a lot since episode two, and I think this was likely the only possible ending for them.

In the penultimate episode, “The Ones We Leave Behind,” nothing seems to be going well for the good guys and they all seem to go in different directions while still seeking ways to bring down Fisk. Karen deals with the repercussions of murdering a man and is haunted with fear that Fisk will find her. Foggy recruits Marcie’s help in taking down Fisk while Matt tracks down Madame Gao’s heroin lab and learns what she has done with all the people she has working there. This episode also confirms that Gao and Owsley had been working together to poison Vanessa, in order to try to return Fisk’s focus to the job at hand. But what did Gao mean when she said her home is a “considerable distance farther” than China? I’ve suspected for a while there is more to Gao than we think, but this makes me even more suspicious. Who is she?

The episode ends with Ben strangled to death by Fisk, his last act protecting Karen by insisting he visited Fisk’s mother alone. The minute I saw Fisk in Ben’s home, I knew that’s how this scene would play out, but it was still terrible to watch. Vondie Curtis-Hall has been wonderful as Ben and I hated to watch it end that way for him – not the least because we spent most of the series watching him come to terms with the fact that he would be outliving his wife.

I love Deborah Ann Woll; her performance throughout the entire series has been stellar, but she really shines in these last few episodes. I love the strength and courage she gives to her character. Karen Page has every reason to allow her fear to cripple her, but instead she stands up and fights back. She proves that you don’t have to be a superhero to be awesome. She’s amazing.

I can’t believe there’s only one more episode after this. Already I’m hoping there’s a second season. I know we still have Jessica Jones, Luke Cage and Iron Fist to go through, not to mention The Defenders, but I really want to see a second season of Daredevil. The sooner the better.