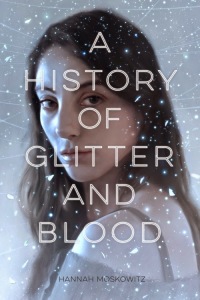 I was looking for a light, easy YA read when I saw this book was about fairies and thought hey, why not. Books about Faerie are usually fun reads, right? Boy, was I ever mistaken. This book wasn’t at all what I was expecting it to be, but it was still an interesting read.

A History of Glitter and Blood by Hannah Moskowitz is the story of three fairies who are the only ones to stay in their city after a war breaks out between the gnomes and a race known as tightropers (their name is pretty much self-explanatory – they spit out ropes that create pathways they walk on, kind of like spiders).

This novel is incredibly dark and depressing and unlike any fairy story I have ever read (with the possible exception of Grimm’s original fairy tales). The fairies in this novel are immortal, as most are, but every single piece of their body is immortal as well. They coexist in their city with the gnomes, who feed on fairies, and when the story opens only four fairies in the city are whole and haven’t had some part chewed off by gnomes. Within a few pages that number is down to two. Making this even darker is the fact that those pieces that have been taken from the fairies remain tethered to the body and can be felt long after they’ve been dismembered. The main character carries around pieces of her father in a jar, because as long as there is a piece of you then you still exist.

Creepy, right? And that’s just the first two pages of this novel. It gets weirder from there. The novel is classified as YA, but I probably wouldn’t recommend it for anyone younger than 15 years old. While the story and the age of the characters are targeted to a younger audience, some of the subject matter certainly is not. I’m pretty open-minded about what I read, but this wouldn’t be something I could recommend to a young reader in good conscience. Three of the characters make a living by prostituting themselves to the gnomes throughout the war; there is a lot of sex, language, and violence in this book that I wouldn’t consider appropriate for younger readers.

But if you don’t mind the content and the language, the story itself is actually fascinating. The structure of the novel is unlike anything I’ve read in a long time. The concept of the “unreliable narrator” is becoming almost overdone in literature these days, but this novel adds an interesting spin on that idea and it’s something you don’t completely understand until about halfway through the novel. When do you realize what’s really happening, and who the narrator is, the story becomes even more interesting.

Another aspect of this novel that I found interesting is that usually when a narrator breaks the fourth wall too much it becomes irritating and removes the reader from the story. However, in this case the comments of the narrator only serve to make you more curious about who the narrator is – and once you do know who it is, you want to know what is happening in the present as he or she is writing the story. So the reader is being pulled out of the story, but drawn further in at the same time. It’s a really fascinating use of that device, and one that helped at to the originality of the novel.

A History of Glitter and Blood comes out on August 18th, and if you’re in the mood for something a little darker and unique you might want to give this a try. Just keep in mind, this is a book that you need to read to the end to get the full effect of the story. You can’t give up halfway through because it doesn’t make sense – everything will make sense in the end.

1 thought on “CJ’s Bookshelf: A History of Glitter and Blood by Hannah Moskowitz”