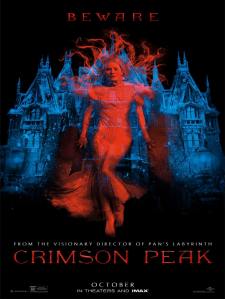 In the aftermath of a family tragedy, an aspiring author is torn between love for her childhood friend and the temptation of a mysterious outsider. Trying to escape the ghosts of her past, she is swept away to a house that breathes, bleeds – and remembers. (IMDb)

The first thing to keep in mind about this film is that it is definitely a Gothic Romance, not a Horror film. If you go in expecting horror, you may be disappointed, but as a Gothic Romance it is extremely well done.

Crimson Peak has all the tropes that make it a perfect gothic film – family tragedy, a dark mysterious stranger, and a creepy old house. There are also ghosts. While the ghostly appearances do at times cause a few scares, this film isn’t about the scares so much as it creates a wonderfully creepy atmosphere as you watch the film. There’s also the element of suspense as you wait for something else to happen or appear.

The plot of Crimson Peak is honestly quite predictable – I don’t think there was a single reveal that I didn’t see coming – but that predictability didn’t take away from the film at all. What makes this film great for viewing isn’t the twists or the surprises, but rather the ride it takes you on as you get to those twists and turns. As I mentioned above, this film has an atmosphere and del Toro is a master at building tension and creating that creepy feeling as you’re watching the film.

The cast of the film is excellent. There are many familiar faces, and every one of them puts in a terrific performance. As a Supernatural fan I have a particular fondness for Jim Beaver and it was fun to see him on a movie screen for once. He is a terrific actor and I’m so excited for him in this movie. I will admit I am also a little biased where Tom Hiddleston is concerned – I would probably love him in anything – but he really did put in a great performance. I am particularly excited for him as this is likely his biggest non-Marvel film release to date. It’s about time audiences start seeing how excellent an actor he is outside of the MCU.

It wasn’t until I was home from viewing the movie that I recalled that Hiddleston had actually replaced Benedict Cumberbatch in this film. As much as I also love Cumberbatch, I cannot picture him in the role at all. Hiddleston definitely owned it and did a wonderful job. He brought a level of depth to the character that made the overall story that much more compelling.

The visuals in this film are also beautiful. Every scene is wonderfully set up and composed; del Toro truly is a masterful filmmaker. Despite the dark and dreary setting, del Toro uses color brilliantly. I have read that the entire house was actually built on the sound stage, and I can only imagine what it must have felt like to walk onto that set for the first time. It is impressive to know that the house actually existed and isn’t just CGI.

While discussing the movie afterward, a friend of mine described it as Edgar Allan Poe with a touch of V.C. Andrews. While I have never read Flowers in the Attic, I suspect that to be an accurate description, especially as the house definitely had a House of Usher vibe.

If you’re interested in Gothic Romance, and can handle some minor disturbing imagery (the ghosts may not be terrifying, but they are somewhat disturbing) and mild violence, then I highly recommend this film. It was extremely well done from beginning to end with terrific writing and imagery, and a wonderful cast. It’s a perfect film for the Halloween season.

2 thoughts on “On Screen: Crimson Peak”