This post is happening a little later than I had hoped, but oh well. Better late than never, right? As I was thinking about this post, I also felt the need to add a disclaimer that I won’t be diving deep into much of literary analysis with these posts (unless I get in the mood, which could happen). I’m really just excited about this project, and hoping to use it as a way to get back in the habit of posting here on a regular basis. 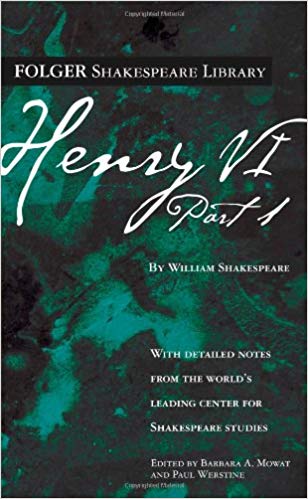 Last week’s play was Henry VI pt 1. While I have read some of the history plays, this is one that I have not read. I’m really excited to already be diving into completely new territory for me.

I know a lot people who aren’t big fans of the history plays, perhaps because they lack some of the originality or creativity of the others, but I am surprised to say that I still enjoy these just as much as the comedies. I’m not sure what it is about these that just draw me in. Maybe it’s the ways Shakespeare still finds to add humor to the language.

1 Henry VI is interesting because this is one of the plays where most scholars agree that while it’s attributed to Shakespeare, and is considered part of the cannon, he likely wrote very little of it himself. Isaac Asimov writes that it’s possible Shakespeare took another author’s play and reworked it. Either way, this play is not entirely Shakespeare.

It’s also interesting in that, though it’s one of Shakespeare’s earlier plays, it was written after parts 2 and 3, making it more of a prequel. Asimov suggests certain plot points or lines may have been added in just to give nods to the other plays, which the audience would have already seen – does this mean Shakespeare also invent the Easter Egg?

Another aspect of this play that I found fascinating (because I really don’t want to use the word interesting again) is the treatment of Joan of Arc – or Joan La Pucelle as she’s known in the play. We’re so used to Joan of Arc being portrayed in a positive light, that’s it’s a completely different experience to be reading the English point of view from closer to her time period. It’s easy to forget that Joan wasn’t canonized until 1920, and to the English in Shakespeare’s time she was far from a Saint.

One thing I’m also trying to keep in mind as I’m reading this is that Shakespeare (or whomever the authors are) really condensed history in this play. All plays have this aspect to some degree, to make fore better storytelling, but according to Asimov, this play does it more than the others.

Overall I am really enjoying this project so far. I know we’re only two plays in, but I feel like I’m back in grad school – reading and studying the texts as well as corresponding analysis. It’s everything I loved about being a literature major without the horrifying debt at the end!