This past weekend I went to see Darren Criss perform at the Theater of the Living Arts in Philadelphia. The only other time I had seen him live was during his performance in “How to Succeed in Business Without Really Trying” on Broadway (which was fantastic), so I was very excited to see him perform some of his own music. 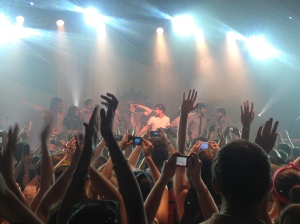 The show was great, Darren was amazing as one might expect. The only downside was that although we were fairly close to the stage, there was one extremely tall older gentleman in front of us who was very difficult to see around. And it seemed every time we moved or tried to shift away from him, he did as well, so he was always right in front of us. This made it extremely difficult to see the stage and therefore I became very frustrated with him. I couldn’t imagine why he didn’t just stand off to the side or back like most of the other parents who had brought their young teens to the concert. However, yesterday I had a thought about this gentleman that made me see him a little differently. I had no idea why he was there. Maybe he was a Darren fan himself, maybe he was a chaperon, or maybe he had a larger story that I was unaware of.

That led to this short story that I’m going to share with you. It’s only a couple pages, but it was inspired by the gentleman at the concert. Follow the link below if you would like to read.

6 thoughts on “A Short Story and a Darren Criss Concert”