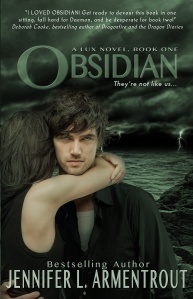 Starting over sucks. When we moved to West Virginia right before my senior year, I’d pretty much resigned myself to thick accents, dodgy internet access, and a whole lot of boring… until I spotted my hot neighbor, with his looming height and eerie green eyes. Things were looking up. And then he opened his mouth.

Daemon is infuriating. Arrogant. Stab-worthy. We do not get along. At all. But when a stranger attacks me and Daemon literally freezes time with a wave of his hand, well, something… unexpected happens. The hot alien living next door marks me. You heard me. Alien. Turns out Daemon and his sister have a galaxy of enemies wanting to steal their abilities, and Daemon’s touch has me lit up like the Vegas Strip. The only way I’m getting out of this alive is by sticking close to Daemon until my alien mojo fades.

If I don’t kill him first, that is. (Goodreads)

I don’t often read YA/Paranormal Romance books. I’m not a huge fan of books where the romance is the main plot, I prefer there to be something else more compelling and the romance be a subplot or something that complements the main plot. For a while the Twilight novels were the closest I ever got to reading Romance, because I had to know what the big deal was with those books. That’s kind of the reason I finally decided to give this a chance – I’ve seen a lot of people raving about it in their blogs lately – along with the fact that although I don’t usually enjoy Romance novels, every once in a while that’s the kind of mood I’m in.

Obsidian is basically Twilight, if you replace the vampires with aliens and make Bella Swan a much better-written and more interesting character. (Perhaps a more accurate comparison would be Twilight meets Roswell). I’m going to be honest and say that I almost put the book down halfway through the first chapter. The writing in that chapter was so bad, I was surprised to find out this wasn’t her first novel. (Please, please, please, don’t ever use the words “my inner golden retriever” in a novel. I can only roll my eyes so far.) I also really disliked the description of Katy’s first meeting with Daemon. (Could the author be any more shallow in the description of him? I’m really not sure.) However, I decided to give the book the benefit of the doubt, and I’m really glad I did because I enjoyed it much more as I kept reading, and I’ll probably continue the series.

Probably the most frustrating aspect of this book is that the plot is so very similar to Twilight, as I mentioned above. Girl moves to a new town, meets strange kids her age that are extraordinarily beautiful and becomes semi-obsessed with one of them, but he does everything he can to push her away. There’s even a talk in the woods when the truth is revealed, a shopping trip for dresses for a school dance, a rescue in town late at night, bad guys hunting them … there are so many similarities it’s almost like Armentrout and Stephenie Meyer used the same checklist while writing their books (Beautiful not-humans all sit off by themselves at lunch? Check).

However, the differences between this book and Twilight are what make it stand out, and make it a much more interesting read. And I’m not talking about the fact that these are aliens not vampires (apparently glowing is much better than sparkling).

First of all, I loved Katy’s friendship with Daemon’s sister Dee. I really appreciated that Katy had a healthy relationship with another female, and wasn’t just all-consumed with Daemon. The other great thing about her relationship with Dee is that they were friends first. Yes, Daemon is the first one she meets, but she befriends Dee first, which I feel is an important distinction. Their friendship isn’t just the byproduct of a romantic relationship. Also, Katy is able to make friends with other girls at the school. Now these friends did remind me of Bella’s normal friends in Twilight, who were really just background characters, but Dee and the normal friends are much more prominent and  more interesting characters than those girls were. Also, it’s important that Katy has so many other connections and isn’t just obsessed with Daemon.

Secondly, I loved that though Katy was drawn to Daemon, she didn’t seem hypnotized by him or ignorant of his faults. Despite her attraction, she didn’t let herself fall for his charm. He was a jerk to her from the start, and she didn’t just let him off easily, even in the end. Considering how horribly he treated her at the start of the book, I would have been really disappointed if she just forgot about all that and forgave him easily (had that happened, it may have actually been worse than Edward and Bella’s relationship in Twilight). This continual back and forth and animosity between them made their relationship and their chemistry that much more interesting, and it makes me more curious to read the rest of the books.

Third, while there is a rescue scene in the books reminiscent of Edward showing up to Bella’s aid when the guys were harassing her, and a couple other times Daemon saves her, Katy also does her own share of rescuing. She is a much stronger and more independent character than Bella ever was as a human. I didn’t once see her as a damsel in distress, the way Bella often seemed to be portrayed. I probably also liked Katy more because we have more in common – Katy is also a book blogger who loves her books. I could actually associate with her character, whereas Bella just seemed to spend a lot of time moping.

So, if you enjoyed Twilight and are looking for something similar, but perhaps for a slightly older audience you may want to check out Obsidian. If you didn’t enjoy Twilight because you thought Bella was lame and Edward was a creeper, then maybe you should give Obsidian a chance. Sure, Daemon is a jerk at times, but he doesn’t sneak into Katy’s room just to watch her sleep (at least, not that we know of) and Katy is a much more well-rounded character. While the writing still isn’t going to be winning any literary awards any time soon, it is an improvement over Meyer’s work and sucks you in just as easily.

If you didn’t like Twilight because Paranormal/Teen Romance just isn’t your thing, well … you might not like this either, but Roswell fans may want to at least give it a chance. You might find it’s not that bad and ever since I read this book I’ve had a strong urge to go back and rewatch all of Roswell.