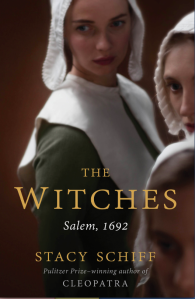 It began in 1692, over an exceptionally raw Massachusetts winter, when a minister’s daughter began to scream and convulse. It ended less than a year later, but not before 19 men and women had been hanged and an elderly man crushed to death. The panic spread quickly, involving the most educated men and prominent politicians in the colony. Neighbors accused neighbors, parents and children each other. Aside from suffrage, the Salem Witch Trials represent the only moment when women played the central role in American history. In curious ways, the trials would shape the future republic.

As psychologically thrilling as it is historically seminal, THE WITCHES is Stacy Schiff’s account of this fantastical story-the first great American mystery unveiled fully for the first time by one of our most acclaimed historians. (Goodreads)

A few years ago I blogged about my Grandma Mary, one of the last women to be executed during the Salem Witch Trials. I’ve known for years that I was related to one of the women executed, but it wasn’t until the last few years that we started to learn more and more about who she was. In the last few months I’ve become particularly interested in anything and everything I can find that mentions Grandma Mary and her sister, Rebecca Nurse (whose name is much more well known than that of Mary Esty). I became particularly excited when I learned that Stacey Schiff, author of Cleopatra: A Life, was publishing a book on the Salem Witch Trials.

Early in my reading of The Witches: Salem 1962, Schiff is an extremely talented writer and has a gift for telling history as though she is telling a story. I don’t often read non-fiction (apart from memoirs) because it tends to be dry, and I read non-fiction much slower than fiction. I still read through this book slowly (it took most of the month of October for me to finish it) but I enjoyed it more than I usually do when I’m reading about history.

The Salem Witch Trials have always been a topic that fascinated me, though I’ve never done much research on my own. Schiff has done an extensive amount of research and it shows in the scope and detail of her writing. At first I was a little put off by her narrative style – she tells the stories of the accusers as if everything they say they experienced actually happened. In this way it made the book feel like fiction at first, but once I adjusted to this method of telling what happened in Salem and Salem Village, it actually made the book more interesting to read.

Instead of just laying out the facts, Schiff translates her research into a narrative that helps readers put themselves into 17th century Salem and get a feel for what their lives were like and what may have been influencing them at the time. Schiff doesn’t offer any definitive answers to the mystery of what happened during that period or why – mostly because there really are no answers – but she offers clues and allows readers to draw their own conclusions as to what may have really been going on. The Witches also opens a new dialogue about the Trials and sheds new light on this aspect of history that for years was swept under the rug in shame.

On Monday evening I was able to attend an event in which Schiff was speaking about her research and the book, and meet her afterwards during a signing. She is an excellent speaker and very intelligent woman. I would have loved to have been able to just sit down and have a conversation with her about her book. If you would like to listen to Schiff’s presentation, The Free Library of Philadelphia has made the podcast available online. I highly recommend listening if you’re interested in the book (or if you’ve started reading already). I actually found myself looking at the book with a whole new perspective after hearing her speak about it.

If you’re interested in history, especially American history and/or witchcraft, this is an interesting read and I highly recommend it. I have not read any of Schiff’s other works, so I cannot compare, but I do plan on hopefully reading Cleopatra: A Life soon. If it’s written in a similar style, then I’m sure it’ll be just as interesting to read.

2 thoughts on “CJ Reviews The Witches: Salem, 1962 by Stacey Schiff”