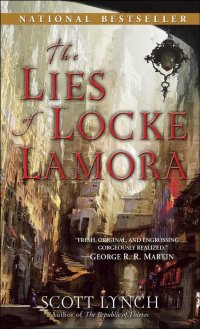 An orphan’s life is harsh—and often short—in the mysterious island city of Camorr. But young Locke Lamora dodges death and slavery, becoming a thief under the tutelage of a gifted con artist. As leader of the band of light-fingered brothers known as the Gentleman Bastards, Locke is soon infamous, fooling even the underworld’s most feared ruler. But in the shadows lurks someone still more ambitious and deadly. Faced with a bloody coup that threatens to destroy everyone and everything that holds meaning in his mercenary life, Locke vows to beat the enemy at his own brutal game—or die trying. (Amazon)

As some of you may know, I was going through a bit of a reading slump the last couple months. I probably finished a grand total of 5 books between December and February, which is extremely low for me (I can usually read at least 5 books a month). However, I think The Lies of Locke Lamora broke through my reader’s block. This book was such a fun read and I’m really glad there’s more books in this series because I can’t wait to see what happens next.

The Lies of Locke Lamora is a fantasy novel set in the large city of Camorr. Locke and his associates are part of a small gang of con artists who end up taking on an extremely dangerous enemy. This book had everything that could possibly make a novel great: action, adventure, intrigue, suspense; I laughed and cried. The tears really took me by surprise as I was not expecting that with this book. This was just a really fun book to read, and I always hated to put it down when I needed to do something else.

I loved the world Lynch created. Readers were dropped into the middle of this city and had to orient themselves to the way things worked. In some ways it was like a story already in progress – readers were given flashbacks to fill in some of the blanks, but there were still a few questions left unanswered by the end, which only made the entire book that much more interesting in my opinion. This was a fully fleshed-out world and these were people with secrets that not even the reader needed to know.

I really liked Lynch’s use of flashbacks to give us background into how the Gentleman Bastards came together and other aspects of their origins. I think Lynch manged to find a decent balance and not make them feel overdone – each flashback somehow tied into what was happening or about to happen. It worked well and really helped tie the story together.

Overall, I highly recommend you giving this book a try if you’re a fan of fantasy novels and/or heist fiction. The length of the novel and amount of detail are somewhat intimidating, but I thought it was definitely worth it in the end. We’re not far into 2016 yet, but so far this is my favorite book I’ve read this year.