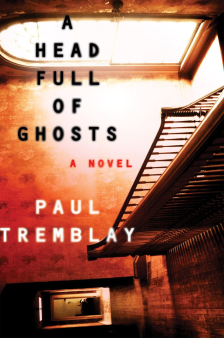 The lives of the Barretts, a normal suburban New England family, are torn apart when fourteen-year-old Marjorie begins to display signs of acute schizophrenia. To her parents’ despair, the doctors are unable to stop Marjorie’s descent into madness. As their stable home devolves into a house of horrors, they reluctantly turn to a local Catholic priest for help. Father Wanderly suggests an exorcism; he believes the vulnerable teenager is the victim of demonic possession. He also contacts a production company that is eager to document the Barretts’ plight. With John, Marjorie’s father, out of work for more than a year and the medical bills looming, the family agrees to be filmed, and soon find themselves the unwitting stars of The Possession, a hit reality television show. When events in the Barrett household explode in tragedy, the show and the shocking incidents it captures become the stuff of urban legend.

Fifteen years later, a bestselling writer interviews Marjorie’s younger sister, Merry. As she recalls those long ago events that took place when she was just eight years old, long-buried secrets and painful memories that clash with what was broadcast on television begin to surface–and a mind-bending tale of psychological horror is unleashed, raising vexing questions about memory and reality, science and religion, and the very nature of evil. (Goodreads)

I had no idea what to expect when I started reading this novel. When I first started hearing about it I thought it was another mystery/suspense thriller. Then I realized there was a supernatural element to it. I’m not typically interested in possession stories – they tend to really freak me out – but I still decided to give this one a chance.

I was almost immediately drawn in to the Barrett family’s plight. I found the structure of the novel made it even more interesting – much of the novel is told from Merry’s point of view as she recounts what she remembers about the incident from her childhood. The novel is also broken down into three parts, each accented by a blog post analyzing the reality television series about Merry’s family. I found these sections particularly interesting as the blogger broke down the episodes and wrote a very comprehensive analysis of how the family’s story was told through the show. As an English major who has deconstructed a text in similar ways many, many times, I really appreciated this element of the novel.

In other reviews and comments about this book I have seen a lot of comparison’s to Shirley Jackson’s The Haunting of Hill House, but by the end I was actually drawing more comparisons to her We Have Always Lived in the Castle. The Barrett sisters reminded me a lot of Merricat and Constance.

Overall Tremblay weaves a very compelling narrative, all the while leaving you wondering if the possession is real or faked. I loved that element of suspense, and the fact that I honestly couldn’t figure it out. I always appreciate when an author can keep me guessing through an entire novel, then hit me with a twist I don’t see coming at the end.

If, like me, you prefer your horror to be suspenseful and creepy rather than violent and gory, then I definitely recommend giving this book a chance. However, like me, you may want to avoid reading after dark.