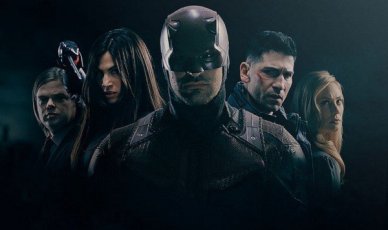 This blog is primarily for posting book reviews and other reading topics, however once in a while I will deviate to talk about other things I am passionate about – mostly movies and TV. One thing I am currently obsessing over is the second season of Marvel’s Daredevil on Netflix.

Last year I broke down the entire first season into a week-long series of blogs reviewing every episode. (If you’re interested, you can find them all here, under the ‘Netflix Binge’ tag.) Unfortunately, I do not have the time for that kind of review this year, even though season 2 is just as deserving of that kind of attention. However, I did want to share some thoughts I had as I was watching the season.

Once again Daredevil has proven how well this format can work for Marvel. I love the tightness of the storytelling and the way the episodes flow into each other. My viewing of Daredevil is near compulsive – at the end of every episode I had to hit play on the next one, because I couldn’t just stop it there (and I was really disappointed when I got to episode 13 and could not hit play on a new episode). Like the first season, this felt like watching a 13-hour movie, though there were several mini-arcs throughout the season that brought a little bit of closure periodically during the season so it didn’t feel like there were too many strings left dangling until the very end (although it did still feel like there were quite a few balls in the air going into the season finale).

After Vincent D’onofrio’s performance as Wilson Fisk last year I really didn’t know how Daredevil was going to top Kingpin in the villain department. D’onofrio was absolutely brilliant and brought so much depth to his performance – he actually made you feel sympathy for Kingpin. Fortunately, the writers and producers of Daredevil didn’t even try to top Kingpin, instead going for a completely different kind of story. Instead of one Master Villain, the Punisher and Elektra storylines were separate but weaved together throughout the season. I think this worked well and the change in pace in that way prevented too much comparison to the previous season as to cause disappointment at the lack of Fisk this season. 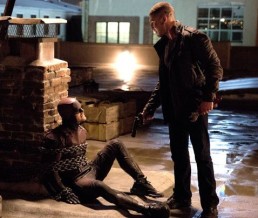 The entire principal cast is excellent. I know I sang the praises of Charlie Cox, Elden Henson, and Deborah Ann Woll last year, but they are just so good in these roles. Henson in particular steals the screen as Foggy Nelson in nearly every scene he is in; he is just fantastic. The addition of Jon Bernthal and Elodie Yung this year only increased the excellence of the cast. Both put in stellar performances, and I was particularly impressed with Bernthal’s Punisher. While I can’t say I’ve seen a lot of Bernthal’s work, from what I have seen this may be his best performance. I would love to see each of these characters show up again elsewhere, either in another season of Daredevil or one of the future series coming to Netflix. They are both very interesting characters, and very well-written.

I am a huge fan of all things Marvel, particularly the MCU. However, I think what Marvel is doing on Netflix may be some of the best storytelling they’ve done. First Daredevil and then Jessica Jones, each show has really nailed the characters and has been extremely well-written and compelling. Everything about each of these shows has been fantastic and I can’t wait to see what they do with the rest of the Defenders universe.

It’s hard to review an entire season of a TV show in just one blog post, but I can say that if you were a fan of season one, you will not be disappointed. I wouldn’t necessarily say it’s better than season one – simply because Fisk made the first season so epic, and each season is different enough to make an equal comparison unfair – but it’s at least as good. And if you’re a fan of the Daredevil comics, but haven’t yet watched any of the series on Netflix, I definitely recommend you making the time to binge the show as soon as possible. They’ve really done justice to the characters and the comics.

So if you’re looking for a dark and gritty superhero drama done well, spend some quality time this week with the Devil of Hell’s Kitchen.